Products recommended in the post contain affiliate links. If you purchase something through our posts, we may receive a commission at no extra charge to you.

While EGR benefits the environment by reducing emissions, it also creates problems for the vehicle’s performance and durability.

After prolonged use, these problems will worsen and lead to a complete breakdown. You must turn off the exhaust gas before irreparable damage to avoid unfortunate consequences.

We will not be able to turn off EGR manually or with standard tools, but only specialized kits like LLY Duramax EGR delete kit can do it. All the necessary information will be in the article below.

What Is A EGR Delete?

Exhaust gas recirculation (EGR) is a feature that often appears in modern cars.

The primary purpose of EGR is to reduce the number of emissions generated by internal combustion engines by mixing different gasses.

Each exhaust gas recirculation includes pressure regulators and air valves with an electronic control board to give different opening and closing commands.

When igniting fuel, part of the exhaust gas mixture often goes back through the valve instead of flying out. The remaining air will mix with the intake air stream and start a new combustion cycle.

Thanks to the reduction and partial reuse of emissions, EGR has reduced many emissions to limit the impact on the environment.

However, the effect of reverse airflow creates severe problems in the long run.

What Does LLY Stand For On Duramax?

LLY is not an acronym nor has any connection to Duramax or EGR. This phrase is simply a string representing regular production code (RPO).

Each type of product that serves a different purpose will have an equivalent RPO.

Here LLY is used to denote “Duramax Diesel Engine.” Another typical example of RPO is the U2K code we often see on satellite radio product lines.

The standard production code is not fixed but is highly dependent on the variation of the product that these characters represent.

Each generation of Duramax diesel engines will have a different wildcard, not just LLY. The first Duramax engine version had an RPO of LB7, and the second evolved as it is.

Any manipulations deep inside the vehicle system also need to be highly accurate and performed in the correct order.

Of course, installing the LLY Duramax EGR delete kit is no exception, as one wrong operation can lead to severe damage.

By following these 14 steps, you can make your work easier while minimizing the risk of injury.

The first step that you need to do is to disconnect the battery from the vehicle’s system.

The size of a car battery is usually not large, but the voltage that this device generates is high and can kill people if accidentally touched while operating.

So unplugging the connection will prevent electricity leakage from the car battery and cause electric shock.

You also need to pay attention to the car’s position before operation. Choose a place with suitable flat terrain, enough light, and significantly, not too wet.

Water vapor in the air destroys the car’s components if this agent can get inside.

After turning off the entire electrical system and putting the car in a suitable position, you can start the operation process by draining the coolant.

According to the process, we will start from the easily accessible places and then go inside the details deep inside the system.

Coolant is often located in the most visible and contaminated locations, so this is an excellent place to start working.

You need to prepare containers and cleaning tools to drain the cooling water.

In the process of flushing the solution, dirt will also appear, and cleaning these agents will prevent blockage of the flow.

Located immediately after the cooling water discharge step is the removal of the intake air resonator because its location is very close to the solution tank.

To avoid spending too much effort when manipulating, it is best to follow this process correctly.

Manufacturers fix the resonator with special tube clips. You need to disassemble these parts with professional tools before proceeding to the dismantling step.

After the tube brace is looser, we will loosen the support pin and use our hands to park the entire intake air resonator.

Although the intake resonator has been removed, the hose clamp is still inside the vehicle.

To access the remaining details, we have to dismantle the parts responsible for this clamping. With standard tools and loosening operation, anyone can disassemble the hose clamp.

The next step is to remove the zip files and pull the cord out of the intake manifold. All operations in this step are not too complex, but you must focus on avoiding using too much force to damage the wires.

Manufacturers often fix the EGR inlet with 6 bolts at 4 corners and two diagonal edges. If you want to work with EGR, you must first remove all the fixed points.

After all 6 bolts have been removed, accessing the hose clamp on the turbocharger is extremely easy. We will use this to loosen and finally remove the intake manifold.

You need to find the PCV tube on the passenger side of the truck and remove it.

Removing the PCV tube will reveal the fixing bolt on the exhaust side of the EGR cooler. All we need to do now is remove all 4 screws available on the part.

We can now intervene directly in the EGR. However, you still have to remove 4 more nuts that fix this part of the car.

Then disconnect all conduits and pull the EGR out of place.

Once there is no more EGR, you must pre-assemble the intake manifold with 2 blue anode plates so that the exhaust can flow according to the vehicle’s requirements.

Usually, 3 short bolts and 1 long blot are the most common type of connection.

Replacing the intake manifold with the bracket and fixing the stainless steel nut are what we need to do in this step.

After installing the intake manifold, the stoppers, and fixing bolts are the following details you need to reassemble the vehicle.

Remember to use two 20mm and two 30mm bolts to improve the part.

All the conduits provided from the firewall to the front of the engine need you to sort and reassemble them as they were original.

Reinstall the intake manifold, intake resonator, PCV tube, and turbocharger, and reconnect the wiring according to the car’s original design.

You Won’t Have To Move Into Continually.

One of the problems that EGR can cause to vehicles is blockages in the pipes caused by the soot in the exhaust moving backward.

The removal of EGR also means that we prevent the risk of details flooding inside this slime layer. With no other factors affecting performance and durability, you certainly don’t need to take your car to a maintenance specialist often.

In addition to causing soot, EGR can leak fuel cylinders or other critical fluids.

All of these phenomena lead to a common consequence of reduced engine performance.

Now the car needs to consume more fuel to keep its performance. So if there is no more exhaust gas recirculation system, the engine will work well and consume less energy.

It Will Potentially Reduce The Engine Temperature

A vehicle with soot that seals the ducts while the coolant leaks and the engine runs at full power is bound to get extremely hot. To reduce the vehicle’s heat, removing the EGR is essential to prevent the above risks.

Your Car Engine Will Serve a Better

When the vehicle is more fuel-efficient and the engine can operate at low temperatures, of course, the performance of the machine will increase a lot.

It Will Void Your Vehicle’s Warranty

Removing the EGR without going through authorized centers is considered an intentional modification.

Manufacturers will often deny warranties for our vehicles if you have arbitrarily impacted the car. If there are any problems in the future, we can only rely on outside repair centers.

Use The Truck Only For Off-Road

In many places, a vehicle with the EGR removed is only allowed to be available for racing or sporting purposes.

In other cases, even driving around the block is against the law, and you will have to pay a fine. So please consider the legal aspects before doing so.

Error Codes For Not Deleting With A Tuner

Modern cars often have a built-in management sensor that ensures every car part is working correctly.

This unit will not allow the vehicle to operate if it detects a lack of EGR. The car will continuously report errors, and you can only ask a professional mechanic.

I have shown you how to manipulate the LLY Duramax EGR Delete Kit in this article. At the same time, it has provided important information for you before and after turning off EGR. Hopefully, you can know more about this part and answer the question of what to do with EGR. 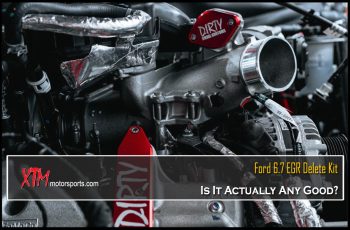 If you are a huge fan of Ford car engines, … 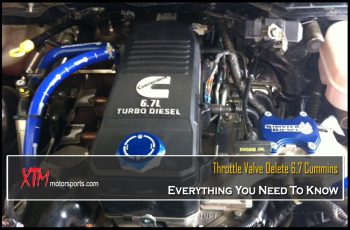 After removing EGR, your vehicle can operate more stably. However, …

No comments to show.

Our website is made possible by displaying online advertisements to our visitors. Please consider supporting us by disabling your ad blocker.